The idea came from the Business Strategy and International Development Clubs and is in line with the many trips organised by the International Development Club, from Lebanon in 2003 to Algeria in 2017, including the memorable trip to China for the Shanghai World Expo in 2010. We were immediately inspired to return to an Expo such as Dubai 2022. In a rapidly expanding region of the world, the idea of taking the opportunity to visit Abu Dhabi, the capital of the United Arab Emirates (UAE) and right next to Dubai, was an obvious choice. A balanced trip between Abu Dhabi, the richest in oil and financial resources, but also and above all the political, religious and cultural center of the UAE, and Dubai, which in a few decades has become the commercial and financial center of the whole « West Asia » region. 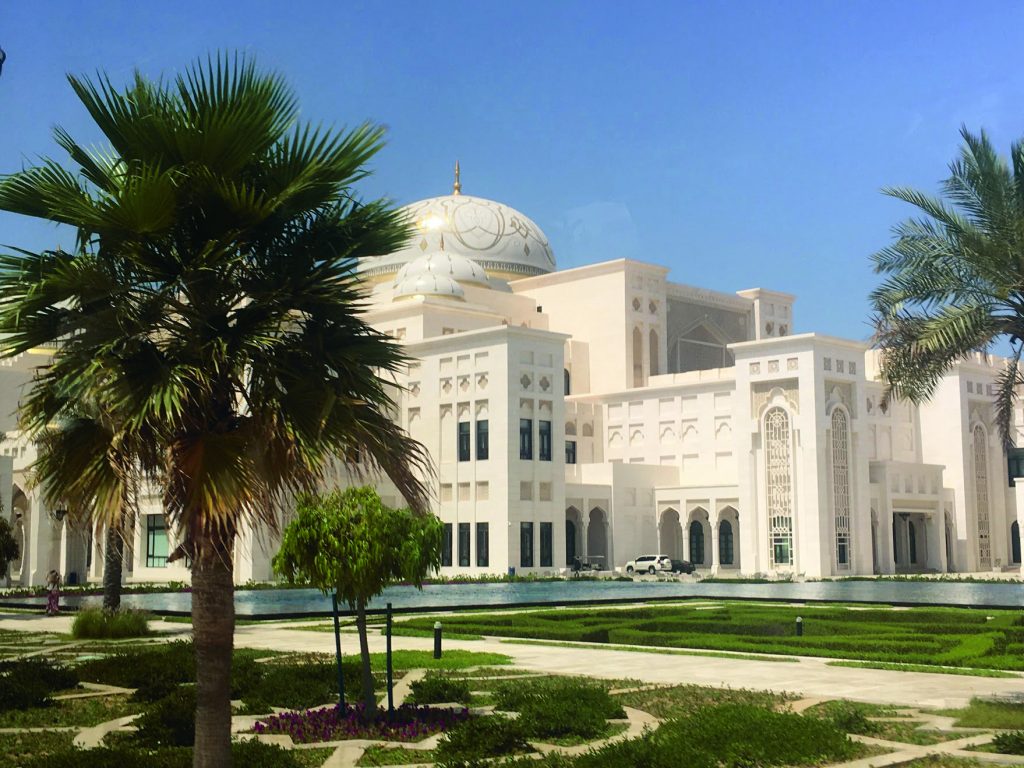 HEC Alumni, in collaboration with the UAE Chapter and our two clubs have co-organized this exceptional trip, which took place from March 23 to 27, 2022. The program included the Dubai Expo (private tours) which ended on March 31, company visits (ADNOC, ADIA, Dassault Aviation, Dubai Port World, CMA-CGM) and the French Embassy, cultural visits to Abu Dhabi (Louvre Museum, Emir’s Palace, Grand Mosque) and the annual gala dinner in Dubai with the HEC graduates of the Emirates Chapter as a networking and celebration opportunity. The diversity of backgrounds and the quality of the participants also contributed to the success of the program: « The more we share the more we grow.”

A land of contrasts where tradition and modernity meet: the change of scenery between modern Dubai with futuristic infrastructures and a cosmopolitan population open to the whole world, and a capital like Abu Dhabi which is more conservative with more marked cultural and religious values. Dhabi’s iconic monuments is a prerequisite to understanding the direction taken by the country’s leaders. The Emirates owe their rise to the ambition of Sheikh Zayed Ben Sultan Al Nayan, the first president of the UAE federation from 1971 to 2004, who dared to transform the country into a Middle East hub. A beautiful quote, represented by a superb gold sculpture (« Power of Words ») at the Emir Qasr Al Watan Palace in Abu Dhabi (see photo), sums up his meaningful vision: « Wealth is not money or oil, wealth lies in people and it is worthless if not dedicated to serve the people » (see photo). The Louvre Abu Dhabi Museum was magnificently designed by Jean Nouvel that illustrates the importance of the dialogue of civilizations for a harmonious development (see photo). Nouvel was richly endowed with works from all periods and was directed by our comrade Manuel Rabaté (H01). And the grandiose Sheikh Zayed Mosque, with a total area of 22,000 square meters and a capacity to accommodate up to 40,000 visitors, symbolizes the religious and spiritual values that underpin the Emirates’ rapid economic development (see photo).

In order to understand the evolution of the area and the possible futures, Philippe Gassmann, regional economic advisor at the French Embassy, gave us a brilliant presentation of the developments underway in all the countries of the region (Arabia, Bahrain, Qatar, Kuwait, UAE, Oman) with viewing themselves advantageously in the globalization process, both politically and economically. The governance by the ruling families was immediately striking with a multisectoral vision (priorities on energy, transport & logistics, defense, finance, distribution, health, agri-food, digital, etc.) and the omnipresent choice of the long term. In order to think about the post-oil era, the diversification of activities was necessary with the support of the sovereign wealth funds and the reinforcement of the country’s attractiveness for foreign investors. Dubai has become an international commercial and financial hub, comparable to Hong Kong or Singapore, where most of the major international companies have based their regional headquarters to handle a wide range of geographical and functional activities.

Abu Dhabi National Oil Company, founded in 1971, has 70,000 employees, nearly 14 companies and numerous Chinese, Indian, Japanese, Korean, American and European partners, who hold around 40% of its capital (including Total, a strategic partner, present throughout the value chain). The company produces 3.5 Mb/d (7th largest producer in the world). It was fascinating to learn from Bertrand Hintzy (E10), an advisor of Total Energies with ADNOC, about the strategy of the group in 10 years. This strategy consists of exploiting the available in order to free up cash to invest and diversify into renewables. In order to achieve its multi-energy transition (gas, solar, wind, biomass, hydrogen), ADNOC has created a Sustainable Development department to target sectors for investment in partnership with other investors. The visit to the « Panorama Monitoring Center » compared to all the company’s facilities on the 37th floor of the ADNOC tower was exceptional.

Abu Dhabi Investment Authority is the country’s largest sovereign wealth fund totaling $650bn under management across 14 asset classes, which is chaired by the brother of Crown Prince SE Hamed bin Zayed Al Nahyan. Thanks to Mamoun Jamaï (H05), Head of Digital Infrastructure in the Infrastructure Division, we were able to discover the powerful investment capacity of the institution in the infrastructure activity, which covers transport, energy, utilities & digital. Geographic coverage on large projects in the OECD zone with high added value and minimum tickets of $500 million. Very interesting focus on Cloud, data centers and associated fiber connectivity.

General Christophe de Cugnac, General Delegate of the group in the UAE, commented on the key success factors associated with the Rafale contract signed in September 2021 (80 aircraft, $17 billion). In particular, he stressed the importance of the partnership and the long-term customer relationship since 1974. The relationship of trust was established by the choice of a sovereignty aircraft such as the Rafale (in its state-of-the-art F4 standard), as well as the respect of the desired quality criteria. The privileged political relationship since General De Gaulle and solid bilateral defense agreements are also structuring factors in this cooperation. The contract is now entering its implementation phase, which will give the Rafale team (Dassault and its partners Safran, Thales and MBDA) the opportunity to meet the challenges ahead by benefiting from Dassault Aviation’s historical collaboration with its Emirati principals as well as the technical and operational collaboration between the two countries’ air forces.

Dubai Port World has a turnover of $10 billion and a net result of $1 billion, which enables them to reinvest each year in new port concessions. The strategic objectives are to reach the 70 ports and free zones in the world, to develop new market segments (retail, industry…) and to push physical and digital innovations. The Flow 4.3 vision presented on the Expo site indicates the multimodal vision of the group’s chairman, H.E. Sultan Ahmed Bin Sulayem; trains, autonomous trucks, drones, planes and Hyperloop are a part of the automated flows that DPW will promote in its economic model. The Jebel Ali site (60% transshipment to GCC countries and 40% import export) represents a traffic of 4 times of Le Havre. With its 4 terminals, 2 of which are automated, it is positioned as the largest port in the region and has the vocation to become a digital platform integrating all the stakeholders (shipowners, shippers, customs, ….).

The container transport market is undergoing a real revolution, which requires shipowners and logisticians to be more agile: « if you sleep, you die!” On the demand side, teleworking has introduced a drastic increase in digitalization and ordering of equipment for the home (office, sport, kitchen…). On the supply side, new IMO regulations in 2021 and 2023 will lead to the scrapping of many non-compliant ships to « further reduce greenhouse gas emissions from shipping,” but there is also port congestion, tensions on flows (cf. the Suez Canal incident in 2021), and shortages of certain critical products such as semi-conductors. The price of container transport is on the rise and logistics is becoming an essential issue for all companies. At the same time, in the next 3 years, the Emirates are accelerating the development of their infrastructures including: a port in Abu Dhabi, an airport in Dubai, a rail with Saudi Arabia, and logistics at the Mugharraq Port base for offshore drilling. There are many projects to follow for a shipping and multimodal logistics group like CMA CGM (see photo), whose representatives Axel Herzhauser and Romain Vigneaux brilliantly presented their activities to us.

We had 21 million visitors in 6 months, which was a record number of visitors from the general public discovering the innovations of the next 10 years, on themes of innovation and universal progress. This Expo 2022 was focused on sustainable development, with each of the 150 national pavilions showing their most exciting aspects: culture, nature, preservation of the planet, resources, creativity, innovations, etc. We visited 7 pavilions in a guided tour, among the top 10 of the expo. There was great preparation effort from the HEC Alumni team, supported by the very efficient scouting work of Catherine Le Louarn (E83). The General Commissioner of the French Pavilion Erik Linquier (see photo) insisted on two aspects: The French Pavilion is of course a showcase for the general public (2 million visitors for this edition) but is increasingly becoming a B to B meeting place in connection with the major trade shows in Dubai. It is also a platform for companies (large groups, SMEs and ETIs) to develop their business for the entire region. And then everyone was able to wander at leisure in this giant « amusement park », which allows you to go from one pavilion to another in a few minutes, from France to Syria, from Portugal to Ukraine, from Haiti to Argentina, and from the Vatican to the Kiribati Islands! So, we’ll see you in Osaka in 2025, where the next World Expo will take place, and where Mr. Linquier will once again be the Commissioner General of the French Pavilion! 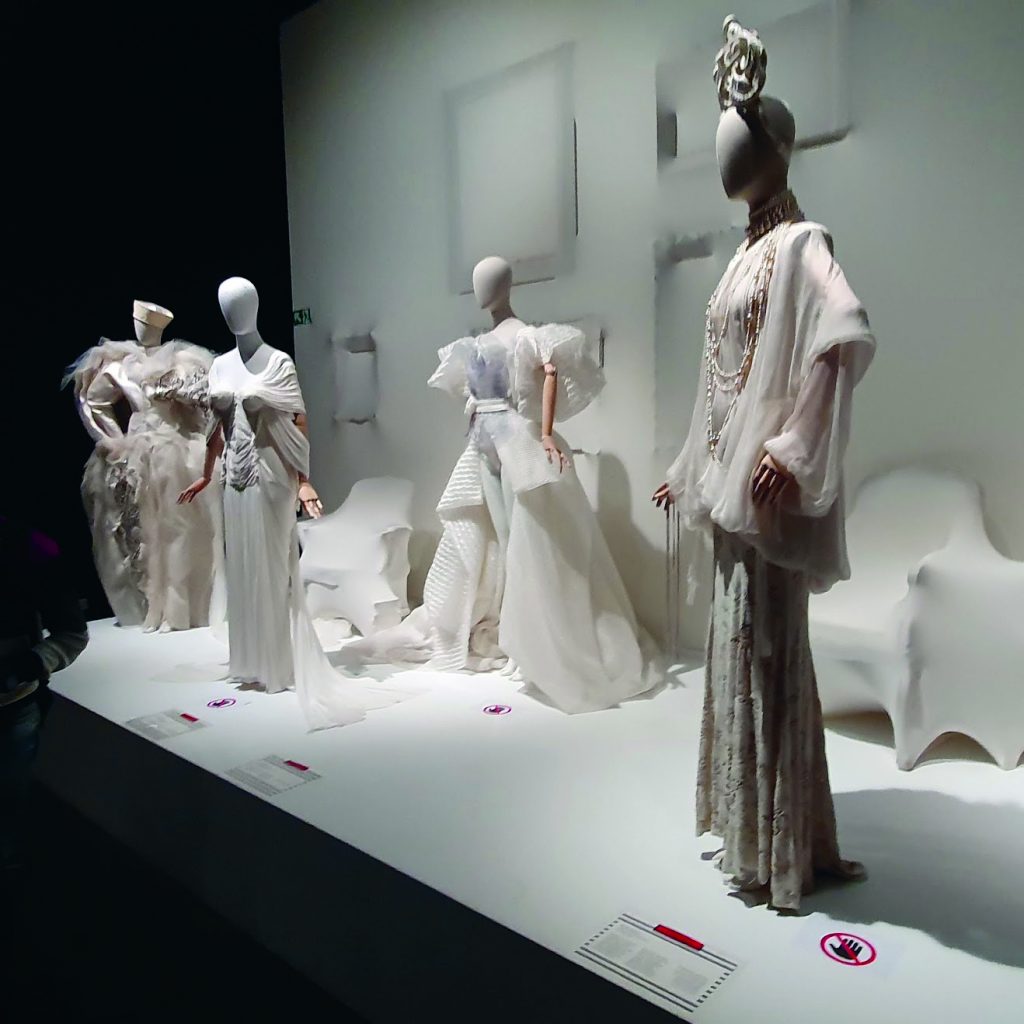 Networking at the HEC Gala

The Gala took place at the 5-star Park Hyatt Dubai Resort in the charming Park Garden. The Chapter President (Ahmad Muhammad Chughtai) and his team welcomed 160 guests, including our delegation and the delegation representing the campus and the HEC Qatar. It was a good mix in terms of seniority (young graduates, middle managers and seniors) and sectors represented (Consulting, Finance, Luxury and Tech entrepreneurs, etc.) from all HEC programs (Grande Ecole, Masters and Executive MBA). 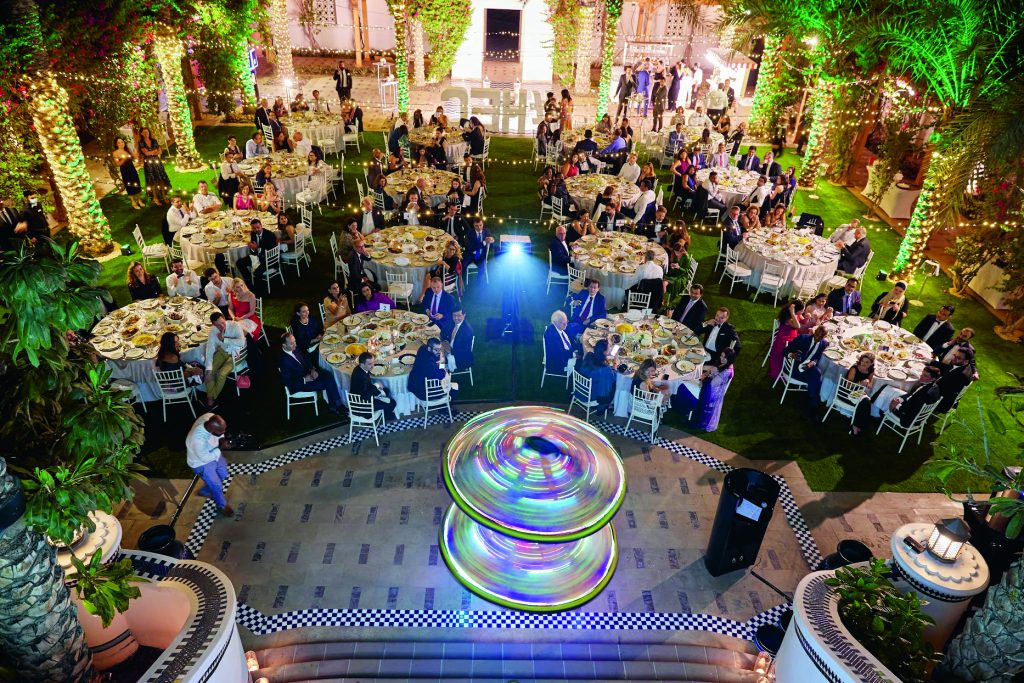 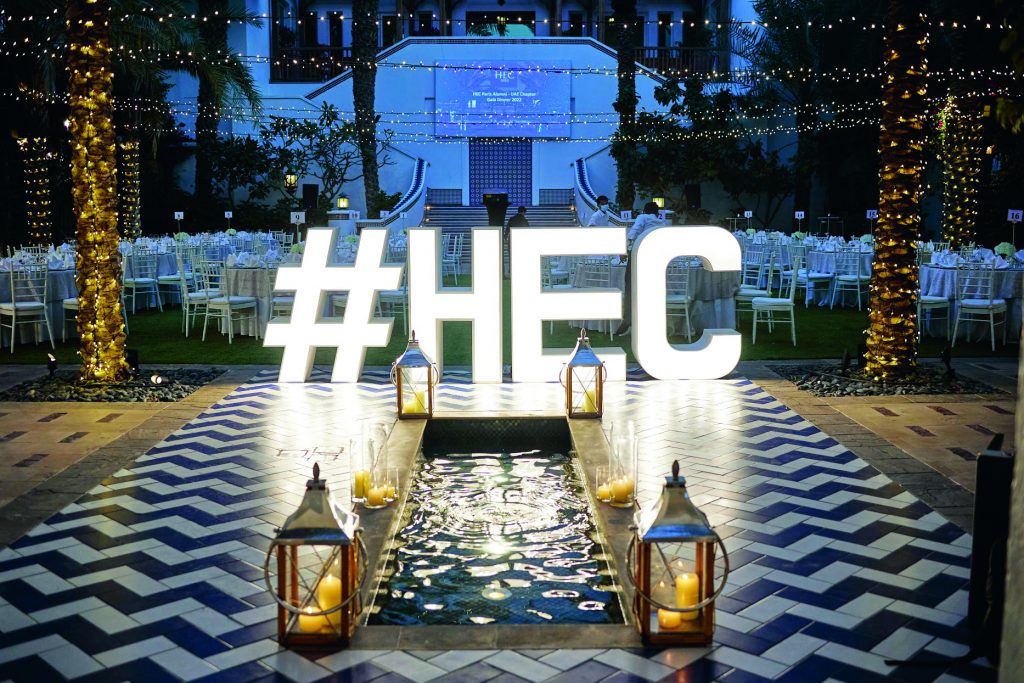 Assessment, the fruits of the journey

It was an exceptional learning expedition with alternating moments of immersion and break; it was an opportunity to dive into economic, cultural and human affairs. What will be the impetus for the future? Firstly, the gigantic weight that this region has acquired in the world since the 1970s, which is the result of the exceptional concentration of energy, financial, and human resources. Secondly, the importance of the long-term strategy of the leaders: investments in innovative technologies, choice of infrastructures and equipment over-dimensioned in anticipation of future developments, tourist, logistical, economic and commercial centers in permanent expansion. Even if oil still has a bright future ahead of it, especially if current prices continue, the post-oil era is on everyone’s mind, and diversification towards future sectors is a constant concern. The result is a service offer that corresponds to the expectations of a large international public, seeking simplicity of life, comfort, security, tolerance, openness, and international standards, sheltered by a still very advantageous tax system. Many impressive assets, with a pioneering will, a thirst for progress, and a taste for adventure which we could largely draw inspiration from! 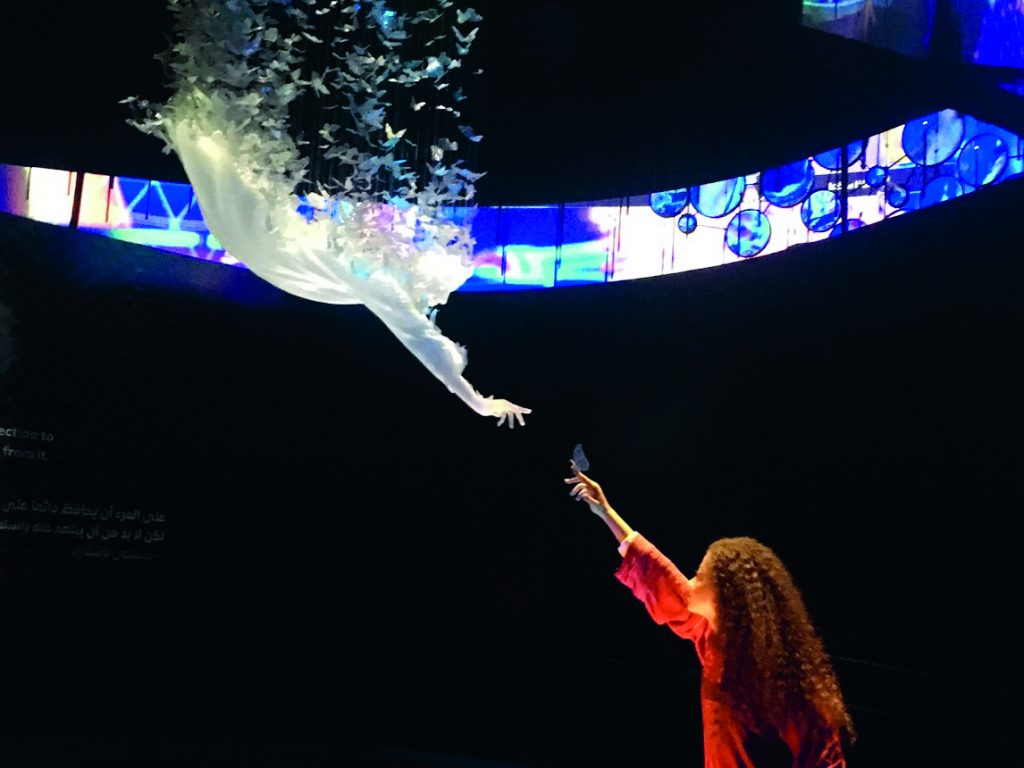