The former fishing port is the link between tradition and modernity. Follow the HEC greeters.

Career diplomat since 2020, I arrived from Paris, where I was an advisor to the Minister of the Armed Forces, to take up the post of French ambassador to the United Arab Emirates. The first thing that struck me in Abu Dhabi was the omnipresence of the sea. It is a blue city with a magnificent archipelago. Despite its recent industrialization, it retains its authenticity.

On Saadiyat Island, the future cultural district of the capital, the Louvre Abu Dhabi tells the story of humanity through a sumptuous permanent collection built by the Emiratis, and loans from French museums in constant rotation. The ingenuity and poetry of Jean Nouvel’s building are marvelous: the dome’s branches let the sun’s rays filter through in a play of light and shadow like the Al-Ain oasis.

Nestled on the edge of the corniche, the old Mina Zayed port has retained its authenticity. Walking along the quay, one can admire the traditional Arab dhows and be intoxicated by the smell of camphor and Indian spices. A colorful fish market reflects the ethnic richness of the country with its Indian, Pakistani or Egyptian merchants. There are also art centers, like the Warehouse421.

A lush forest in the heart of the city, the Mangrove Nature Park is a haven of peace that stretches over 75 km2 and is crisscrossed by canals. Once endemic, the mangroves have been replanted to give the city more character and improve its carbon footprint. By kayak or boat, you can sail through a landscape of mangroves, plants and a rich fauna of lagoon birds, fish and turtles.

After more than twenty years spent in European institutions, I flew to the Emirates two years ago. In charge of business development in Africa and the Middle East for a French digital group, this change allowed me to get closer to my clients in the middle of the Covid period, when the planes were grounded.

Cigar and music aficionados will appreciate the atmosphere of the Manhattan Lounge at the St. Regis Hotel in Saadiyat. Here, one can sit on leather armchairs in an exceptional architectural setting and enjoy a drink in a jazzy atmosphere. The view of the hotel’s gardens, the beach and the Gulf of Saadiyat is magnificent. The contrast of green and blue is unique.

The waters of the Persian Gulf were the ideal place for pearl farming. The History & Aquarium Museum traces the traditions of pearl fishing, when the country’s borders merged with those of Oman or Saudi Arabia. The visit is done on a seat hung on a rail. The place refers to the Al Hosn fort, the first residence of the sheikhs in the Emirate, built to protect the city’s first freshwater well.

It is the perfect place to practice horseback riding, a traditional discipline in the Emirates. Located only twenty minutes from the city center, Al Forsan is a first of its kind sports and entertainment complex in the Middle East. In addition to the equestrian center, you can practice wakeboarding, water skiing, karting, archery and pistol shooting. But also cycling, jogging, paintball, swimming…

Beyond the religious and spiritual aspect inherent to the place of worship, the Sheikh Zayed Mosque unites civilizations through craftsmanship. A marble mosaic testifies to the know-how of the Italians, while the plasterwork and woodwork pay tribute to the Moroccans. On the floor is the world’s largest hand-woven carpet from Iran, while on the ceiling hangs chandeliers adorned with 24-carat gold and Swarovski crystals. 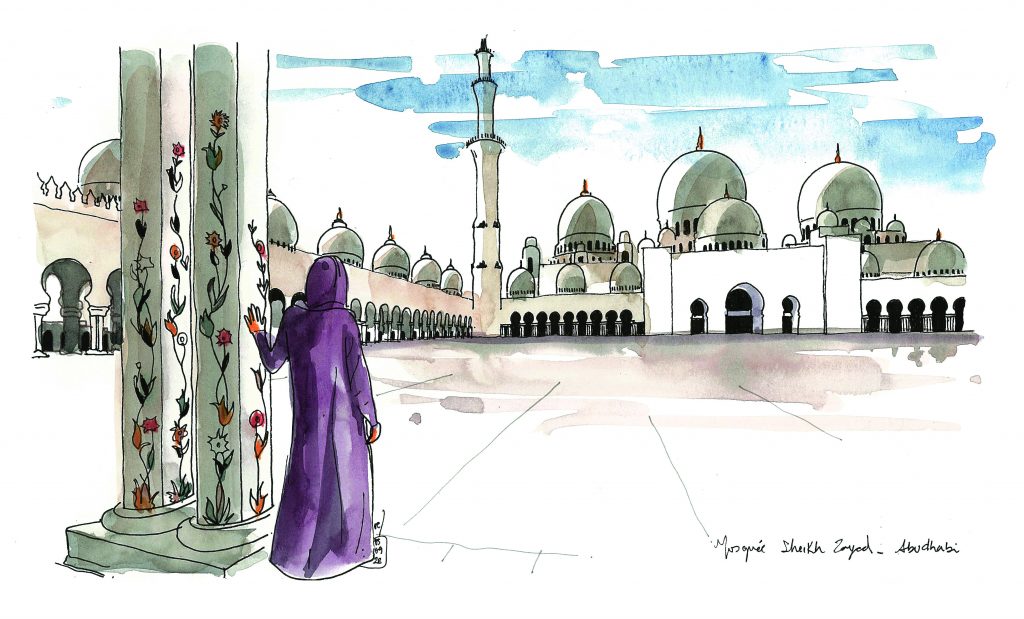 Thirty minutes from the city center, the Yas Marina circuit hosts the last stage of the Formula 1 Grand Prix in November. A great moment for the capital. The rest of the year, you can come to the circuit to do some laps, driving your car or booking a McLaren experience. In the evening, the circuit turns into a bicycle path and becomes a favorite playground for families.

It is almost Peru

In a cozy setting, Coya restaurant offers a lively atmosphere and an exotic culinary experience. We discover a cuisine that revisits the traditional dishes of Peru. The guacamole or the churros are memorable, as well as the menu of mezcals. Only the bill is high, the price to pay for being in the financial world, as the restaurant is located on the island of Al Maryah, the financial epicenter of the capital.

Like Dubai or Basel, the Abu Dhabi International Art Fair welcomes regional and international galleries in November. Works by contemporary artists are exhibited at Manarat Al Saadiyat. During the rest of the year, the venue hosts smaller but high-quality exhibitions that showcase regional artists. The ideal place to feed an aesthetic soul.