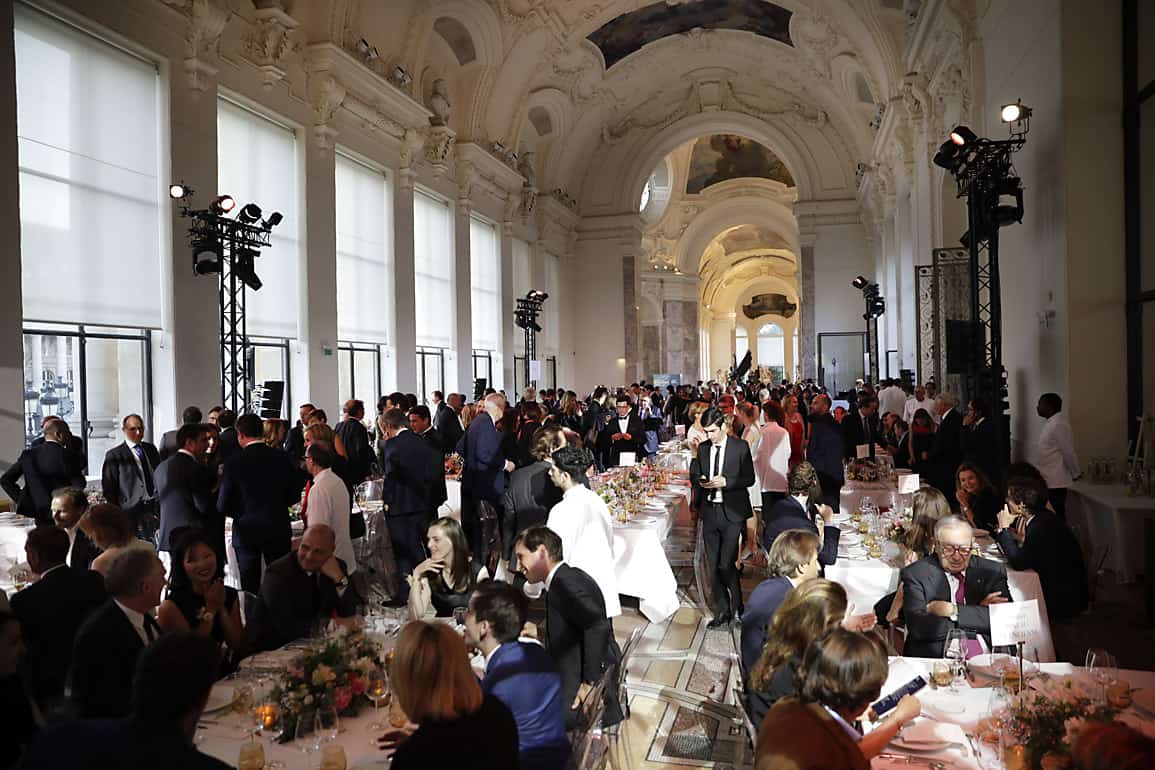 There was a full house for the first HEC Gala banquet, with more than 300 guests. The event raised €243,000 for the HEC Foundation.

June 20th, 2019 will be a milestone: the prestigious event organized by HEC Alumni brought the HEC community together in the enchanting setting of the Petit Palais, just a stone’s throw from the Champs-Élysées and the association’s headquarters. On the agenda for this first edition of the HEC Gala: a cocktail with musical accompaniment, a guided tour of the “Romantic Paris” exhibition, a sumptuous dinner in the vaults of the southern pavilion, an auction, and dancing in the courtyard gardens…

“I have always had admiration and respect for your school, which I am very interested in today, as Minister of the Economy and Finance,” said Bruno Lemaire, our guest of honor at the banquet, in his opening address.

“Since its founding in 1881, HEC has remained at the top of the rankings. And as everyone here knows all too well, it’s not easy to stay at the top for nearly 140 years!” joked Frédéric Jousset, President of HEC Alumni.

“HEC, just like a company, has a social responsibility,” he continued. France needs our School to represent it. And that is the objective of the fundraising campaign that the HEC Foundation launched this afternoon at the Quai d’Orsay.  Ten, twenty, or forty years ago, we dreamed of getting into HEC. Let’s now help others to make their dream come true, by participating in the auction for the benefit of the HEC Foundation.”

Among the nine lots up for auction: a day in the vineyards of the Louis Roederer Winery, a weekend at the Rencontres d’Arles photography festival, an exclusive dinner in the kitchens of the Plaza Athénée with Alain Ducasse…

And Bruno Lemaire spontaneously added a tenth: a private dinner in the minister’s dining room. The alumni responded generously to the appeal. By the end of dinner, as the first dancers set off for the dance floor, €243,000 had been raised for the Foundation.

A magical evening, to be repeated next year!

Welcome to Marguerite Gallant (H.04), who joins the HEC Alumni association in Paris as Deputy CEO at the head of the Careers Branch. After working for ten years in investment banking, Marguerite spent five years as the ambassador of HEC Paris in the United Kingdom, where she managed the London office. Her track record: developing an international career offer and strengthening synergies with the school in the Lifelong Learning program. And many thanks to Alain Nebout (MBA.87), Marguerite’s predecessor, for his twenty years of service to HEC!

The Careers Branch is launching a key initiative for the network: the HEC Pulse online mentoring platform, which connects alumni and students all over the world. “We have been running a mentoring program for several years now, firm in our conviction that the network is a powerful way to accelerate career development and experience firsthand the solidarity of the HEC network,” explains Stéphanie Pfeiffer (H.15), Lifelong Learning project manager at the Careers Branch. Until now, the mostly French-speaking mentorships were coordinated manually. With the internationalization of our alumni and the possibilities offered by digital technology, it was time to give the program a new look! HEC Pulse is a tool that makes it easier to connect with others in our community. Now it’s up to the alumni to use it to build a relationship!” Join the platform today: www.hecpulse.com

HEC alumna of the year

Amélie de Montchalin (H.09), was named HEC Alumna of the Year at the HEC Alumni General Assembly on June 3rd, 2019. Frédéric Jousset (H.92) commended this “new generation of HEC alumni, whose members are leaving the business world and committing to public service.” After Exane, Axa, and a master’s degree in public administration from the Harvard Kennedy School, Amélie was appointed Secretary of State for European Affairs last March. “HEC produces committed people who fight against fatalism,” she said.

Since its launch in January, the Infinity Pass has spurred new initiatives! Over 4,100 alumni had opted for the lifetime membership as of early June. Encouraging results! And they should get a further boost when new exclusive services are rolled out soon.