HEC Paris co-sponsored the French Women Entrepreneurs 40 (FWE40) initiative to reward 40 growing French companies run by women and offer them support. At this year’s Women’s Forum Global Meeting, HEC graduate Claire Cano-Houllier was one of two 2022 prize winners for her decade-long devotion in creating Hiflow.com, logistics for mobility. This new way of appraising car transport uses a digital platform to deliver vehicles and rents out cars for as little as €1… a first in France.

Claire Cano-Houllier, you spent four years studying at HEC (between 2008-2012), leaving with a master’s 2 entrepreneurship. A decade later, can you share with us how it contributed to your entrepreneurial path ?

Clearly, my studies had a great impact. As soon as I finished my Master, I co-founded Luckyloc.com with another HEC alumnus, Idris Hassim (H12) and applied much of what I learnt in those four years, especially at the beginning. Already, I had met several inspiring entrepreneurs in the course of the degree who encouraged me to pursue my objectives. Even after graduation, they continued to accompany us.

But so did a principle that was at the heart of our entrepreneurship program: jump into the deep end and learn how to swim. And that’s exactly what’s needed in the business world. In the first year as an entrepreneur, Idris and I pored over every detail of our projects, we navigated complex situations and we learnt from the knocks that we experienced. Our studies gave us a positive energy and a certain degree of courage to dare take initiatives. Looking back, some were quite extraordinary. That’s what I retain: it gave us this will to get out there and knock on doors, sometimes very insistently… at times, I wonder if I wasn’t a little too insistent, but no, because that’s how I met people who helped my company go further. So the motto Learn to Dare really fits with entrepreneurial realities.

This FWE40 Award is under the patronage of the ministry of economy and finance. During the ceremony, its minister Bruno Le Maire said there is still a way to go before France has parity in terms of women entrepreneurs. What challenges are you meeting in your field?

Oh, there are still plenty. When I first started out with my male associate 10 years ago, we were few women in the entrepreneurship field. And I’m very proud to see this proportion is rising in business schools like HEC – they certainly have contributed to preparing these new generations of women entrepreneurs which opens up so many possibilities in business. But we remain in the minority. In my case, I’m in an automobile logistics sector where there really are very few women. When we began we always pushed towards selling something. It’s at the heart of entrepreneurship, selling your product, selling your services. And I realized that my only clients and interlocutors were men, especially in the managerial posts. It was a bit of a shock, especially as the ratio during my Entrepreneurship Master was more like 50/50. I became aware of this big change. So, we have to continue to work on reducing the divide and one way of doing that is by organizing events like the French Women Entrepreneurs 40. They highlight some of the extremely virtuous initiatives launched and expanded by women. You should know that this award was a response to the French Tech’s Next 40 program in which only one of the 40 companies chosen was led by a woman. It irritated many of us, which is why the Women’s Forum decided to launch this award. It’s a bit of a shame to go to such measures but it underlines the fact that Next 40 really focuses on valuations. Well, there are dozens of women-led firms out there that are showing great aptitude in fundraising and have huge potential for growth. We have to continue to spotlight their successes to inspire others. There only remains a small mental barrier slowing us down – and it could be overcome if more companies are run by women. I’ve noticed that women-led firms create team parity. More people apply because they feel that there won’t be entering an all-male atmosphere if the founders are female.

So, I just want to send that message out there: if you have an all men’s team at the start, you’re going to have problems. You have to integrate women in the starting team to have an entrepreneurial culture that’s balanced. That way, you invite more women to apply and join up. At Hiflow, we have a staff of 80 and it’s split straight down the middle, 40 women, 40 men. And I’m convinced it’s just because the women who applied figured it wouldn’t be a 100% masculine atmosphere. Frankly, by transforming companies from the top, you immediately feminize the teams and that’s how you reach parity. 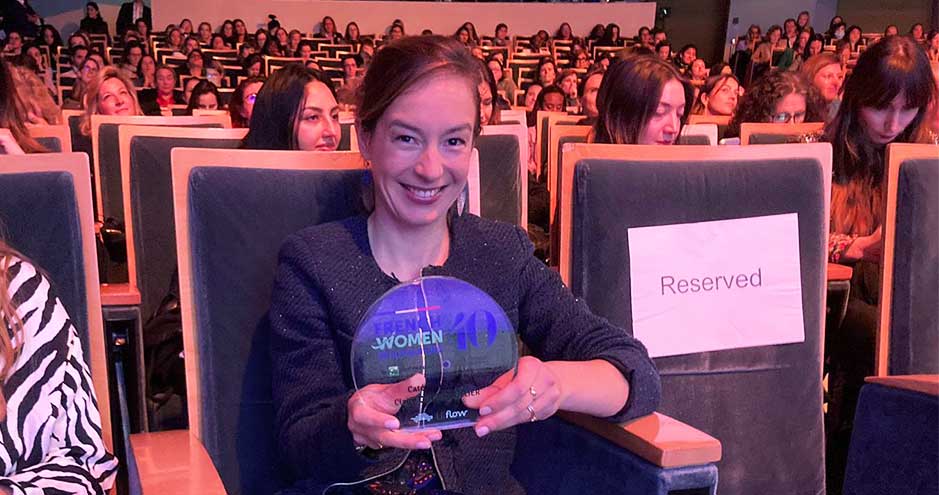