The loss of biodiversity is a major ecological threat. To remedy this, a radical transformation of our economies is needed. Only actions carried out by adopting a global approach to biodiversity and value chains, beyond any sectoral divide, by economic actors, public authorities and civil society will be able to initiate such a transition.

Biodiversity cannot be reduced to the survival of a few emblematic species. It is a much broader concept that encompasses the diversity of individuals, species and ecosystems. The variety of life forms and natural environments provides a range of ecosystem goods and services that we benefit from every day. Many of these are non-replaceable: pollination, oxygen production, climate regulation, etc. However, scientific data now predicts a phenomenon of species extinction, population decline, destruction of ecosystems and deterioration of functional interactions.

This would be the sixth mass extinction. The crisis is fuelled by five phenomena: land and ocean use, overexploitation of resources, global warming, pollution, and invasive alien species. Economic activity has various influences on these different factors, which makes a sectoral approach to biodiversity conservation necessary. Indeed, without a full value chain analysis, the bulk of the externalities will not be considered. It should be noted that the links between biodiversity and the human economy must be considered in both directions: most industries have a negative impact on biodiversity, while their activity is based on the goods and services provided by the natural environment. In this respect, companies are sawing off the branch on which they are sitting. But the complexity of the mechanisms affecting biodiversity makes this danger less clear than other risks they may face.

Although the planet does not belong to the market sector, economists have tried to estimate the monetary value of the goods and services provided by natural environments. Pollination, a natural process that is essential for plant reproduction and fruit formation, has been estimated at $500 billion a year. The supply of marine products? 362 billion dollars. Tourism from the Great Barrier Reef in Australia? $36 billion annually. Biodiversity is also essential to the health sector: more than 10 000 plants are used for medical purposes, according to a report published in 2020. In total, the value of the « Earth enterprise » would thus be in the trillions of dollars.

The purpose of the White Paper

The White Paper on Biodiversity, published by HEC Alumni last June, has three objectives: to raise awareness of biodiversity issues among the HEC community and all economic players, to challenge business leaders and political decision-makers to take action, and to feed the debates at the upcoming COP15 conference. This report is not intended to be exhaustive and does not replace the scientific literature on the subject. Its objective is to point out the current gaps in knowledge and regulations. It also aims to promote dialogue between business leaders, policy makers, academics and citizens, in order to align our economies with a sustainable development model that does not threaten ecosystems and natural resources. More than fifty interviews with business leaders and investors (notably from the HEC community) as well as with biodiversity experts have informed the thoughts and recommendations compiled in this book. 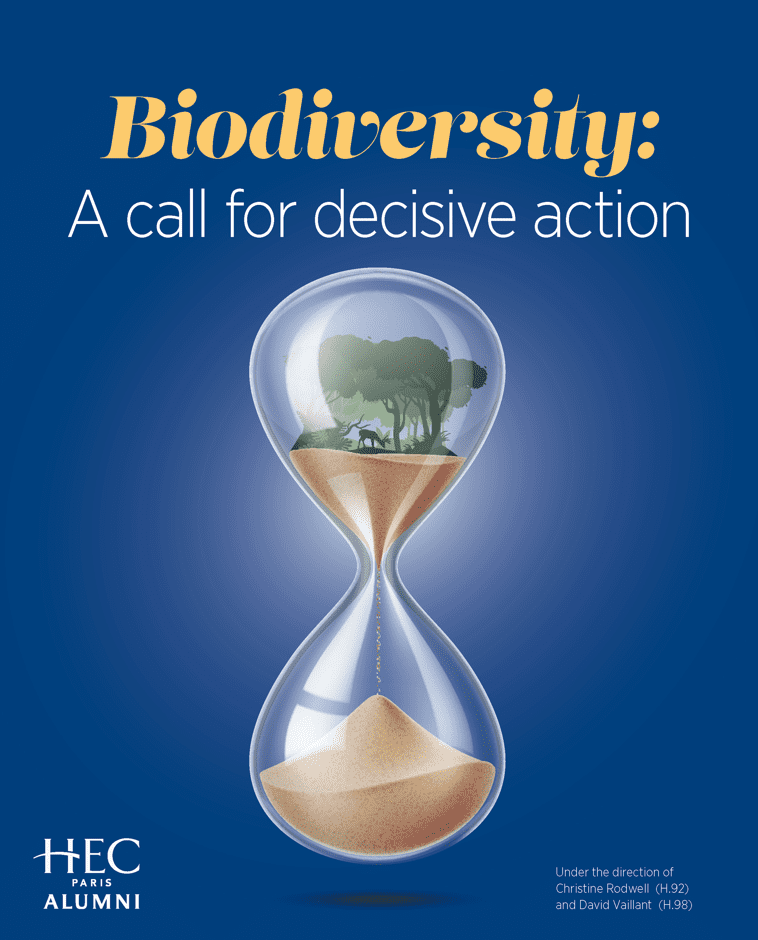 Mitigating climate change to the Paris Agreement limit is a prerequisite for reducing or halting biodiversity loss. Conversely, preserving biodiversity is a necessary condition for mitigating climate change. While climate change accelerates biodiversity loss, biodiversity loss creates the conditions for global warming. This vicious circle becomes clear when we consider the amount of carbon dioxide assimilated by natural environments (oceans, soils and forests). Trees, through the process of photosynthesis, store CO2 and release oxygen. However, the high rate of deforestation, with 15 billion trees felled each year according to the FAO (United Nations Food and Agriculture Organisation), poses a joint risk to the survival of species and to limiting the greenhouse effect. In other words, climate and biodiversity, which are closely linked, must be considered as « twin crises ».

While climate change is now a widely shared concern, the biodiversity crisis is less well known. Yet awareness is growing, particularly in the business community, which is well placed to tackle the problem, provided that it takes advantage of its agility, access to finance, and deep understanding of production processes. Preserving biodiversity challenges the very foundations of our economies – including the belief in unlimited resources. Acceptance is therefore a major challenge. This is why education and training must address all environmental issues, including those related to biodiversity. Through the integration of these topics into school curricula, and through the training of qualified experts in higher education who can design the future techniques and regulations for this transition. Given the speed of biodiversity loss, there is also a need to educate current business leaders, many of whom graduated before biodiversity challenges were known and understood. Their decisions could have an impact for years to come. Finally, a deeper dialogue with the scientific community is needed, encompassing both hard and social sciences. Innovation can also contribute to the emergence of new solutions based on biomimicry, plant proteins or the circular economy, but it cannot be a miracle solution and will not avoid profound societal changes.

While CO2 (or carbon equivalent) emissions allow us to measure our impact on the greenhouse effect that causes global warming, there is no single indicator for assessing changes in biodiversity. The multiplicity of factors likely to upset the balance of natural environments (pollution, water situation, sanitation, animal and plant populations, geographical variability) makes any single indicator of little relevance. However, the absence of an indicator should in no way prevent communities from acting for biodiversity.

Biodiversity issues are by nature local and specific to each economic activity. The White Paper on Biodiversity has chosen to focus on two sectors whose role in future transformations appears essential: agri-food and finance. Agriculture and food production are the cornerstones of the preservation of natural balances. Their transition requires an in-depth rethink of the systems developed over the past centuries, whose objective was to secure supply by intensifying production. This strategy has shown its limits by accelerating the collapse of biodiversity. Some painless measures, such as the fight against food waste, would allow initial progress. However, most of the changes will be difficult to implement, as they involve phasing out synthetic pesticides and fertilisers, as well as restoring crop and diet diversity. On the consumption side, changing diets to increase the proportion of plants and reduce the proportion of animal protein could also bring public health benefits. Incentives and structural changes in the food supply would facilitate this change in habits. In order to make the transition successful, the financial sector will also have a role to play in allocating capital. It will probably take several years for banks to change the nature of the hundreds of thousands of loans in their portfolio, but they will be able to take advantage of their long-standing relationships with client companies to encourage changes in production methods. Insurers, exposed to the risks of biodiversity collapse, will have to react quickly to avoid large-scale failures.

A profound change in production processes and economic dogmas implies a change in mentalities and consumption patterns. The role of consumers is decisive: they have a powerful short-term lever to encourage companies to make the transition. Lastly, biodiversity conservation must be supported by public policies coordinated between countries, which represents a considerable effort to bring them together at a time when geopolitical tensions are increasing. This multilateral response will be crucial to address the North-South divide: low-income countries, which are often more exposed to the biodiversity crisis, lack the means to act, in addition to facing problems in financing their economic development. From the ecosystems of the Congo Basin forest to the fabulous oxygen reserve of the Amazon jungle, no corner of the planet will be effectively defended if our actions stop at state borders.