Nicolas J. Bureau’s untimely passing came on the 05 April 2019. A successful banker, dedicated husband and father, and also a great friend to many. Nic was born on the 14 of October of 1980, son of a French engineer and an American Nutritionist, he was raised in California with his summers spent in La Baule, west of France. He left us too early at 38 years old, here’s a small but meaningful summary of his legacy.

As anybody who came across Nic we can always say he was most a most dedicated and extremely resourceful professional. He had not only the charisma that many remember but also a huge drive for success. His only motivation behind everything he ever did was the happiness of those close to him, starting with his daughter Sloane and wife Erica. Nic was a graduate of Emory College in Atlanta and then a graduate of the Grande Ecole with a Strategy Major at HEC Paris in 2007. His multilingual abilities helped him successfully work in London, California and ultimately Paris where he and his wife had decided was the place where to settle their family for the future. We would like to pay a tribute to Nic, he meant a lot to many people around the world who met him through the HEC network and through working ventures and socially. His drive to succeed, perseverance, sense of responsibility and business acumen are only some of the qualities of an individual that stood out by himself and in a crowd, a person who was generous and infectious with ’joie de vivre’. Nic will be thoroughly missed and never forgotten, he lives in our hearts and memories. 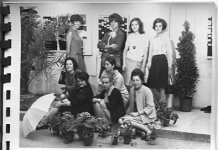