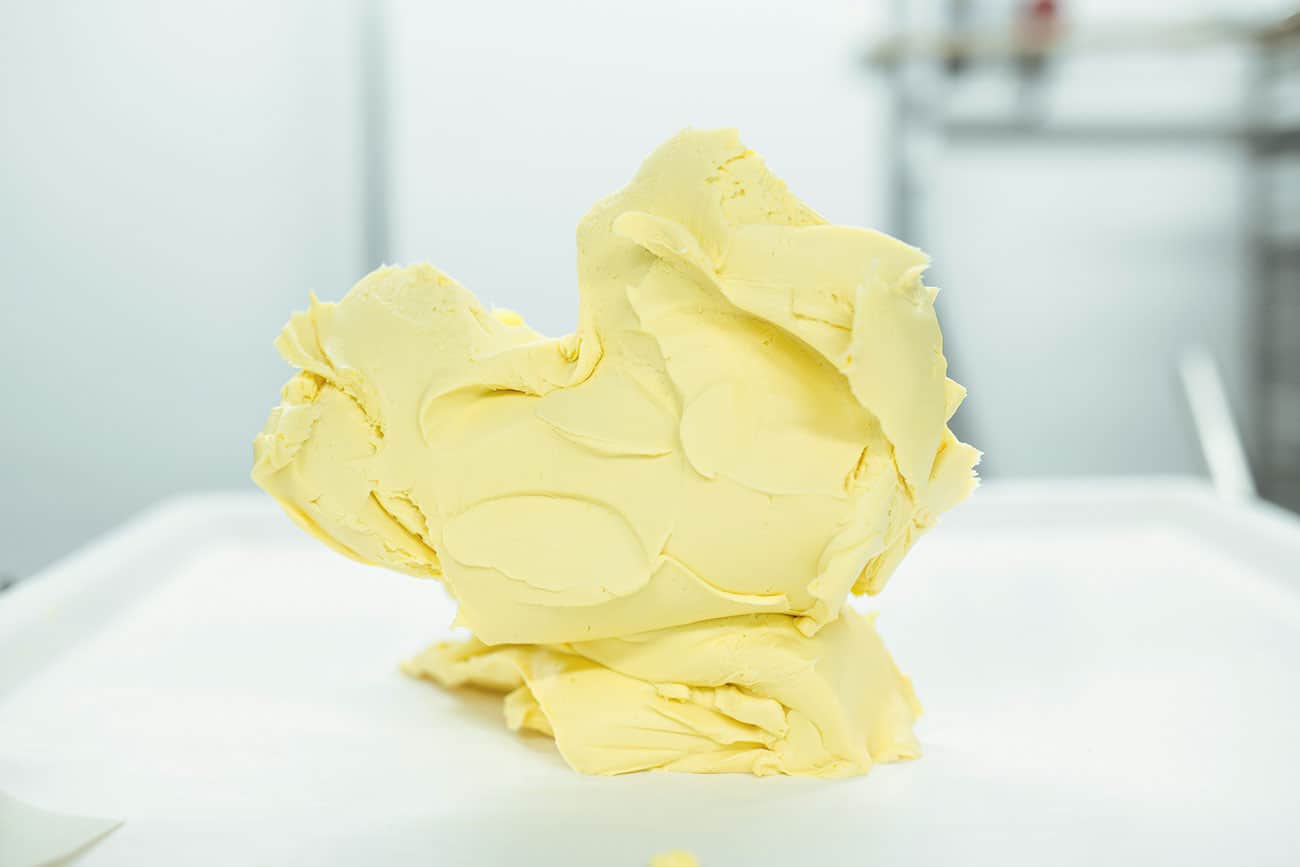 David Akpamagbo (H.08) is a cattle-raiser and craftsman based in Brittany’s Finistère region. His butter, with its subtle nuances that vary with the seasons, is the delight of many famous chefs. A product born of his passion, utopianism and persistence.

He’s not an easy man to find. Even after driving for three hours across northwestern France on a February morning, we crossed our fingers that he would appear for our appointment in Kerguérez, a hamlet outside Leuhan, right in the heart of Finistère. When we found him there in an overheated pre-fab building, deep into a phone conversation and in the middle of his work day on the farm, we understood. David Akpamagbo is a one-man band, as he is the first to admit. This 35-year-old head of a company and breeder-craftsman is involved in everything: his feet in pasture, his hands in butter and his head in the balance sheet. He has been doing this for the past 12 years, ever since he launched his crazy project to produce exceptional butter and meat from A to Z.

From the quality of the grass his cows eat to the production of little yellow squares of butter, not to mention the race of his cows and the way he milks them: everything has been carefully analyzed, thought through and calculated. This total mastery of the value chain demands colossal knowledge. “You have to be good at genetics, raising animals, production, pasturage, etc.”, he explains distractedly, sitting at his temporary desk, worn Nikes on his feet, socks rolled up over his black jogging pants. His daily life and the challenges that drive it seem very, very far removed from the days when he was a student at HEC. He refuses to see himself as an archetypal anti-HEC graduate, however. The school’s heritage is still a part of him. “I’m still guided by the way I was taught to structure my thinking,” he says. “I see this in myself every day in the way that I seek out solutions.”

Strange as it seems, it was actually a class at HEC that inspired him to get involved in producing butter. It was a presentation by Vincent Bastien, CEO of Louis Vuitton from 1988 to 1995, on strategies for marketing luxury products. “I don’t think I took a single note, but his words echo in my mind even today.” The class gave him the idea to apply the principles of luxury goods to butter production. Butter was something he already knew a lot about: his maternal grandparents were breeders and dairy producers in Ponclet (for which he named his company) in Finistère. He remembers, “Butter was the basis of my grandmother’s rich cooking.”

He also remembers walks through the countryside with his grandfather, who taught him to be “very attentive” to everything around him. The memories of his country holidays deeply affected this young man born in Paris, whose father was an airline pilot originally from Bénin and whose mother was an employee of France’s civil-aviation authority. HEC diploma in hand, he’s inspired by “The Productivity of Grass”, a book by the agronomist André Voisin. “Grass is a complex, changeable, living medium,” he explains. Grass is key to the quality of his products, because the better his cows eat, the better their milk, and, finally, the better the butter. To put these theories into practice, he sets up his business in Locmélar, just a few kilometers from his grandparents’ farm. He convinces breeders to get involved in his project. He chooses specific races of cattle: Jerseys and the Breton breeds Armoricaine, Froment du Léon and Pie Noir. His cows live outside all year long, eat only grass and are milked only once a day. Their milk is transported to his dairy while it’s still warm. Through endless experimentation, David perfects his recipe for butter. He reveals, “To make something with your own hands is totally exhilarating.”

From milking the cows to labeling the butter takes about a week. A long and labor-intensive process reflected in the prices of this butter: 32 euros per kilo before taxes for professionals, and up to 50 euros a kilo for other customers. Then again, Le Poncet butter, with its subtly varying flavors depending on the seasons, has definitely made a name for itself. It can be found on Paris’s most famous tables — including the multi-starred Alain Ducasse restaurant in the Plaza Athénée, Christophe Pelé’s Le Clarence and Maison Rostang — and it has even traveled all the way to Hong Kong and Singapore! Demand continues to rise. David hires new staff and buys more cattle. In 2018, he even buys a new farm in Leuhan, an hour from his dairy in Locmélar, so that he can raise his own cattle and produce milk from them. In the summer of 2019, however, he starts to question what he’s doing. “We had demand and know-how, but we were still coming up short financially and we couldn’t always supply our customers.” A difficult moment after which he decides to reduce his company’s scope and cut down on the number of salaried workers, from 12 to the current five. It’s the price to pay to allow him to continue to offer top-quality products. From a high of around 500 kilos of butter per week, he now limits his production to around 200 to 250 kilos per week.

He has also reduced his meat production, from six animals sent to the butcher per week to the current two. He has turned his company around and also has more control over the complete value chain. “I want to feel that every one of my 500 cattle and every liter of my milk is a treasure,” he explains. His dedication to high quality involves similar dedication in his daily life. He works around 12 hours a day, every day of the week. He takes about one day off a month. Up until very recently, he was living like a monk in a room in an intercommunal guesthouse; he smiles as he shows us a photo of it on his phone. Now he’s living in a house next to his dairy and pastures. He’s operating in “commando mode”, he tells us, and committed to it. “I’ve always lived simply. I like getting in touch with the essence of things.” This is probably what he’s trying to show us when he takes us to one of his pastures, where around 15 of his cows are grazing on this cold February morning. “Luxury products involve something very human and very local. They shouldn’t cheat,” he muses. By choosing to manage his production of meat and butter from beginning to end, this Breton has chosen to incarnate luxury in its purest expression, a respect for the natural quality of a product and incredible self-sacrifice in the work involved in making it.