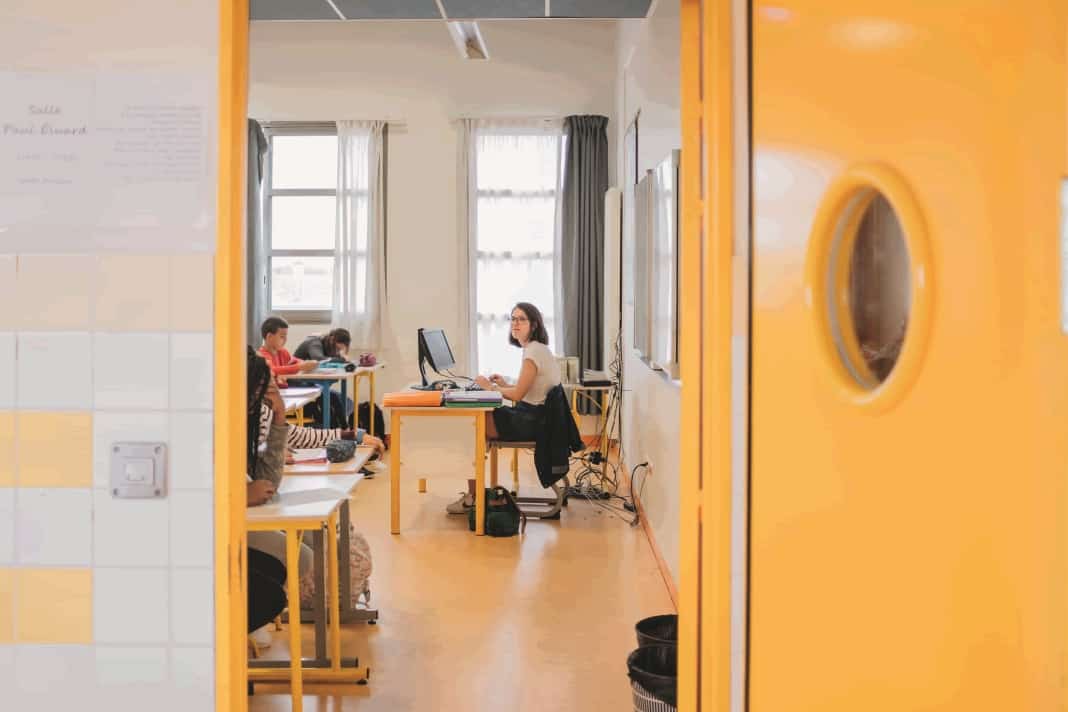 Just this once, we’re going to school this Monday morning, to a grade five class. We’re at Lucie Aubrac de Villetaneuse middle school, a high-priority-education* school in a suburb north of Paris, sitting in on a French class taught by Capucine Collin (H.16), an HEC graduate who changed her career path to become a teacher. The class has 20 students, all of them clearly excited to have the media there. “We’re going to be on TV?”, one of them asks. “Is it for Le Parisien?”, asks another. The class hasn’t started yet but Madame Collin already has to assert her authority and get the students to calm down: “You can sit down when you’re all quiet. Houda, you’re wasting everyone’s time!”

This casually dressed young woman seems right at home here. Hard to imagine that she’s been employed for less than two years in a profession her studies didn’t prepare her for. This morning, the students are working in pairs. They have to write a satire in the form of a play that targets any profession they choose. The instructions are written on the blackboard: put the name of the person speaking in capital letters before each speech, use stage directions to explain how each actor should deliver lines, etc. The pair of students in front of us decided to satirize the French president. Interesting idea, but they haven’t gotten very far in writing a script…

The class is getting a bit rambunctious and Madame Collin has to rein them in pretty often. After 20 minutes, she moves on to something else. “Finish writing at home; turn in your text next Monday,” she tells them. She then demands a minute of silence before beginning the second half of the class, which involves reading a text. The students are preparing an end-of-the-year show based on Molière’s L’Amour médecin (The Love Doctor). “Get under the skin of your character. Don’t be afraid to try things out. If you don’t give your character some personality, the audience will get bored,” the teacher urges.

After the lively hour-long French class, followed by a thankfully much quieter Latin class, Capucine Collin can take a break. Over lunch, she tells us about her decision to switch careers. After her HEC M2, this young woman from Saint Cloud traveled for six months with a fellow HEC graduate. Trained by the association InFocus, the two women made communications videos for NGOs that were promoting inclusive education in Africa, Asia and Latin America. “We discovered some very impressive projects. I was so moved by the hard work and dedication of these teachers,” Capucine Collin explains. Nevertheless, she began her professional life by taking a typical job for an HEC graduate: working in an international-development consulting firm. But, she resigned after six months…

“Sitting in front of a computer didn’t make me happy at all,” she admitted. Realizing that she wanted to teach, she applied to begin a training program with Le Choix de l’école, an association that encourages young graduates or people at the beginning of their careers to become high-priority-education teachers. She says, “I learned about this association at HEC Carrefours. I loved preparing materials for the selection process. I felt in my element right from the start.”

In fact, she is one of six students from her HEC year – all young women – who enrolled in this program! “I’m sure that these numbers are going to grow,” she predicts. “More and more people from my generation are looking for careers that make a difference, and more of us are realizing that teaching – a job that currently doesn’t have a lot of status – can be worth doing.” Through the program, Capucine received a month of training just before she began summer school, and then assistance during her first two years of teaching.

In summer school, she learned how to prepare lessons and lead a class while also familiarizing herself with the French public-education system. She also made some valuable connections. For example, she prepares her Latin classes with a fellow graduate of Choix de l’école. Going from Jouy-en-Josas to “9 to 3” was eye-opening, but Capucine Collin rejects the clichés: “It wasn’t such a big deal for me to start working in high-priority education. It wasn’t as much of a shock as some people imagine.” She spent her first year as a teacher in a high-priority school in Saint Denis, and she met the challenge. She remembers, “It was pretty tough. First of all, they’re adolescents, always prone to get rowdy. On top of that, some of them came from unstable family backgrounds. How can you ask them to settle down and be quiet when their home life is always chaotic?”

?” A lot of students tried to provoke her, and it was often very tempting to expel them, but then that’s just what some of them were waiting for. “It’s a really physical job, but I don’t mind that. The first year, I always went home totally exhausted,” she admits.  In spite of that, she loves her new profession. She explains, “I never get bored. The students are always surprising me with their ideas! There’s a lot of solidarity among high-priority-education teachers, and you have a lot of freedom in this profession.” In fact, she has complete autonomy in choosing which subjects to cover and how long to spend on each lesson.

She says, “There’s no list of required literary works. We organize things by theme, such as travel. Since I love literature, I really enjoy preparing my classes.” All this is far removed from her HEC courses in accounting and logistics. On the other hand, the HEC focus on showing initiative, for one thing, has been a real plus in her new career. She says, “I throw myself into a project, I put the cart before the horse, and then I find a way to make it all work!” This year, for example, she managed to get grant funding to take her Latin students on a trip to Nimes and Arles.

She also set up an open philosophy class every Friday at lunchtime that has attracted around 15 students, most of them in grade six. She explains enthusiastically, “They’re amazing. They have a lot of things to say about questions we bring up, like ‘What is happiness?’ and ‘What are we doing on Earth?’.”

With her salary of around 2,000 euros a month for around 50 hours of work per week (18 hours of classes and “about twice that” in preparation time), Capucine is well aware that she earns a lot less than most of the HEC graduates in her year, and her salary is not likely to rise significantly. But she isn’t sorry. “I feel lucky; I found a job I like,” she explains. Does she think she’ll do this her whole life? She says, “As long as I have the desire and the energy to teach my students, I’ll keep doing it! But probably not for 30 years.” The best profession in the world is one driven by passion.